When we knew that the Chair of the Waterloo Partnership Sierra Leone was coming over to England we approached Liverpool Football Club to see if they would kindly donate any items for the people of Waterloo Sierra Leone.

A week later we received a reply saying that they had collected some items of clothing that they were willing to donate. To our surprise, when collecting the items there were 3 bin bags full of clothing. The total weight of clothing was 17kg!
When Mr Badara Mansaray, the Chair of the Waterloo Partnership – Sierra Leone, arrived he was amazed and delighted with the football items. Badara has now returned to Sierra Leone and had started to distribute the clothing to vulnerable children around the Waterloo district.

You can see from the pictures the delight of the children. We give a big thank you to Liverpool Football Club for their kind donation. 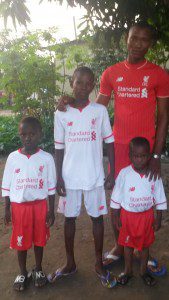 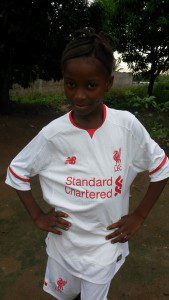