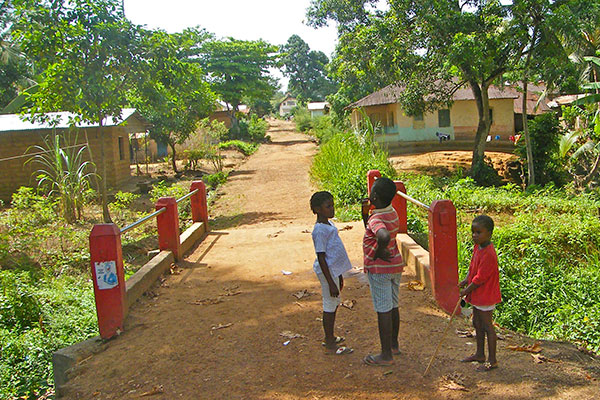 The four bridges built in recent years by the Waterloo Partnership, the Williams Street (2009) the Oroko (2010) the Independence (2011) and the Mano Corner (2011)  bridges continue to make a big difference to the lives of the people of Waterloo and the nearby areas. Journeys, especially for children, aged residents and market traders, are much safer and less hazardous. No longer is it necessary to travel to the hinterland, avoiding life-threatening and precarious make-do crossings. Time spent in travelling has been reduced, and avoidable accidents, especially involving children, diminished. The Williams Street and Oroko bridges are much appreciated by mourners going to the Christian and Muslim cemeteries respectively.

While initial requests for bridge building focused solely on the need to construct a suitable thoroughfare, subsequent joint visits to the sites by WPSL and WPUK members, resulted in the recognition that more was needed if such bridges were to have a much longer and useful life. Where necessary, funds have been provided for the paving of river beds to prevent erosion, for retaining walls to river banks, and for nearby road consolidation and drainage. All bridges have been further enhanced by the addition of safety rails.