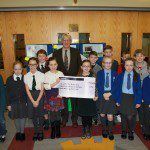 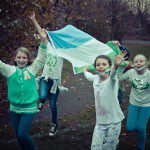 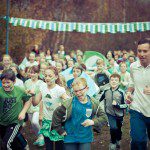 The schools arranged a variety of individual and collaborative fundraising activities, from Fun Runs to an evening at Anfield, the home of Liverpool FC. All of the proceeds from the events will help us in our fight to help the community of Waterloo, Sierra Leone. One of the teachers at the school writes……

“If your next door neighbour was dying of Ebola you would do anything you could to help.  Well our friends in Fano School are our neighbours, but just a bit further away.” It was when nine year old Melissa with the honesty of a child, casually uttered these words, that I realised that the children of our school were way ahead of the staff in understanding the impact of Ebola and how we were being called to help.

Teachers from All Saints Primary School, Anfield first visited Sierra Leone in 2010 to meet with our partner school Fano, a small school of 120 pupils in a corrugated iron shed. Life was incredibly difficult for them, but we were moved by their zest for life, and the joyfulness of the partnership soon spread back to Anfield. Over the last four years there has been a visit to Sierra Leone and a return visit by one of their teachers each year. As a result our children have learnt an incredible amount about the lives of children in West Africa: not just the sad stuff, but how they play, pray and spend time with their families. As the news began to filter through about the horror of Ebola (one of our teachers , Frank, lost  his wife and young daughter to the disease and had to spend three weeks in quarantine with his other daughter and young baby who had still been breastfeeding),  it was the children who led the charge to fund raise. They organised themselves into little groups who bake cakes to sell, make bookmarks or jewellery, run raffles, spot the ball and even a guess the pop star as a baby competition. One girl, Emily, ten, spends her full pocket money every Saturday buying cakes at discount shops to sell in school, handing over all profits over to ‘help our friends in Sierra Leone’.

A local community charity, The Waterloo Partnership, works directly in its namesake town of Waterloo in Sierra Leone; where Fano School is situated. The charity is helping to feed the quarantined, like our teacher Frank, and is supporting some of the hundreds of Ebola orphans. Any money we raise is distributed by the Waterloo Partnership to help those in the most desperate need.

As the weeks passed and the situation worsened, the children realised they would need more help. Each year our visits to Sierra Leone had taken place with several other schools from across Liverpool and Sefton.  We joined with them to make a video, which the children starred in, asking other schools in the area to help. It can be viewed on the internet here: http://vimeo.com/109508987  .

With the schools working together in a way rarely seen before, it was hoped that across the schools we could raise £10,000 by Christmas.  Each school has been fundraising in school, coming together for big events that we hope will publicise difficulties Ebola is causing for our partner community.

At a time when people accuse our youth of being selfish and lazy; at a time when we seem to care less and less about each other, it has been a privilege to work with a group of children who have worked so hard to help their neighbours  – even those who just happen to live 3000 miles away.