Did you enjoy the trip?

To answer this question you need to have traveled with me – to experience the excitement of a very different culture, to feel the warmth of a tropical sun, to be greeted by friends with the widest of smiles, and to live in a hotel overlooking a beautiful beach with the sound of the forest to lull you to sleep. See my first picture for an idea. 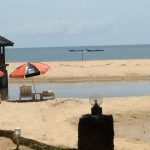 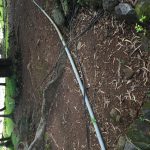 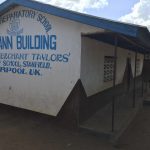 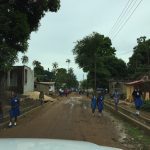 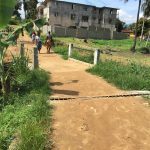 However you would soon also realise that the culture is tainted with layers of heavy and inflexible control, the tropical sun burns the ground and frustrates the farmers, the friends are generous with their welcome, but at the expense of earning their living, and the hotel is surrounded by serious soil erosion. And as David Attenborough suggests, the beach is heavily polluted with plastic and local rubbish! (Picture 2)

In short, Sierra Leone is a balance – on one hand a wonderful people and country but surrounded by difficulties that you and I can only start to imagine.

And that is why the Waterloo Partnership and other charities are needed to help enable those people to realise their potential and re-establish their country.

Three other trustees from the Partnership joined me and between us we offered our skills and work experience from medical consultancy to teaching and from long-term school links to bridges and buildings. 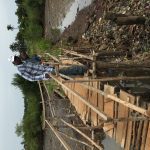 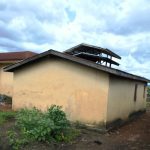 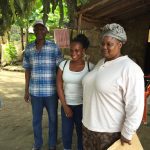 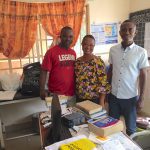 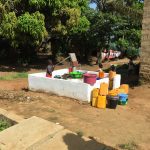 Badara, the team leader in Waterloo, who is known to several people here in Crosby, had been out of action earlier this year with an appendix operation that had led to complications. In the UK an appendectomy would have been dealt with quickly and efficiently, but in Sierra Leone it was a case of gritting teeth, waiting, paying and praying. During our visit we met a number of people with curable or treatable medical conditions, but have no access to western health care. However, via the Internet and some well-placed medical friends around the globe, a young lad was been given a second chance of life, and a girl with epilepsy was treated by a top consultant.

Through the generous support of Crosby people, we are able to send quite large sums of money to Waterloo, Sierra Leone, which is a township a few miles from the capital city Freetown. The purpose of this visit was to see how the various projects that we had sponsored had flourished (or otherwise) and to plan the next year or two so that we can ensure that our funds are used in the best possible way.

We need not have worried.

Just about every school that we visited and very person we talked to showed significant improvements since our last visit a year or so ago – the links between a number of Sefton schools and their adopted counterparts has seen schools and their teachers improve standards and teaching practice and the pupils that the Partnership sponsors had achieved improved levels in their national examinations. (Picture 3)

Unfortunately that is not the final solution however, and we looked closely at what happens when children leave school. There is virtually no tertiary education in Sierra Leone – no apprenticeships or career opportunities, colleges or universities are few and even then they are well beyond the financial resources of most families.

The Partnership have enabled a few bright students to train as nurses,

but even after qualification there is virtually no paid work. ‘Volunteer working’ is the norm with a few chances to earn a little money for food or clothing.

For those with no particular skills the only way they can survive is living on the streets – begging or scrounging whatever they can. We met up with a young English teacher who runs a small charity to help some of these children in Freetown, and who offers them some skill training. We hope to follow his example, but it will take some time and a lot of money to put such a scheme in place. 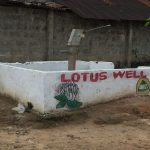 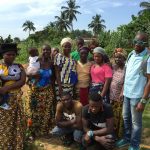 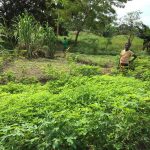 A prime example of very poor planning is the road system in Waterloo. Built by the British some 200 years ago, the township is laid out in a grid pattern of basically un-surfaced clay streets with poor drainage. The result of which is a crisscross network of heavily eroded roads. The government decided to improve things and the main road through the centre of the town was bulldozed flat and impressive new rain water gullies built along either side to be level with a new tarmac road. Unfortunately in the meantime there was a general election, and the new government had a different political colour and so cancelled the road construction programme.

This has left Waterloo cut in half by a road that has gutters 12 inches higher than the dirt roadway (and therefore totally ineffective) and which also block the dozen or so roads that cross the main road. (Picture 4)

In a more cheerful note, the three concrete bridges built by the Partnership are in fine shape and with a little help to assist local drainage they are doing a great job. (Picture 5) In addition, a new wooden bridge that was built a few months ago with our help can be seen in the photographs – it is made entirely of wood and was built in just two days after a 150 year-old bridge was swept away in a storm. For just a few hundred pounds and a lot of hard labour, an outlying village and school were re-connected with Waterloo. (Pictures 6 & 7)

The local bakery that we built now boasts a double layered roof (Picture 8) to protect the oven inside from the horrendous rains, and the Waterloo Health Centre has enough paracetamol for six months thanks to Crosby donors!

The Partnership has paid for the training of one nurse, Cynthia, and is currently paying for the training of three more, but sadly they will not be able to obtain paid work for several years. Paid work requires a licence from the government, and to keep government costs down these licences are in short supply. Nursing work is readily available in the Waterloo Health Centre where the majority of nurses on the work rota are ‘volunteers’. (Picture 9)

The maternity room in the centre averages three births a day, but has just two beds. The Centre can ask for the use of an ambulance to take seriously ill people to Freetown hospital, but that single ambulance is shared with 52 other centers over a very wide area.

With no running water, and no anesthetics you can now probably see how difficult the medical situation really is. (Picture 10)

For some years we have been able to fund the digging of wells around the township – I think it is now five or six. The last two have been funded by individual donations from the UK and the benefit to the 30 or 40 families living near those wells is easy to see: plentiful clean water leads to improved health, and without the long walks to the river, the children of the family are more likely to go to school. (Pictures 11 & 12)

We also support many groups of “farmers” – basically small groups, mostly women, who cultivate areas of marshland and produce 4 or 5 crops each year. Enough to feed their families & sell surplus to pay for their children’s education. (Pictures 13 & 14)

One further memory that will remain with me or a long time is the visit to a local church for Sunday Mass. Waterloo is half and half Christian and Muslim, and they co-exist wonderfully well, in fact mixed marriages are common and there is total respect between the churches and mosques. We found ourselves in church for the 10.30 service and settled down amongst the congregation of about 150, all dressed in their finest, in a sticky temperature of 30 plus.

Two and three quarter hours later we staggered out!

The service bore only a little similarity to what we are use to, but was more of a cross between a talent competition and political rally. The priest harangued the congregation for 20 minutes for their poor timekeeping, the servers for 10 minutes for being inattentive and everybody for everything else! He repeated the various bible readings phrase by phrase in an impassioned voice, only interrupted by collections. Various gospel type choir groups and an enthusiastic drummer completed the musical scene. Oh, and did I mention that there were multiple collections?

In a country where the majority of people have nearly no money, they were expected to put money on the plate FOUR times – and somehow they did. The previous week the total giving was just nearly £20 – you can be assured that that total was well beaten the week we were there!

Despite the huge difficulties that surround everybody in Sierra Leone, the overall mood is upbeat and positive. They recognise both the problems in their life and the help that we can offer. Without embarrassment on either side they make us welcome and share their houses and food with us – they accept that they have almost none of the benefits of ‘Western’ lifestyles but are not jealous of us. Their child-like humble dignity is a true example of how we should live our lives. From the welcome we received to the final farewells, the mood was upbeat and positive.

So – Did we enjoy the trip?

We returned to the UK happy, excited and dismayed. Dismayed at the pitifully small impact that we can make on their overall situation, but happy and excited at what has been accomplished over the past 11years and, with your help, what we plan to support in the future.

How You Can Help

To give regularly, please click here for a Standing Order form which includes the opportunity to make a Gift Aid Declaration.